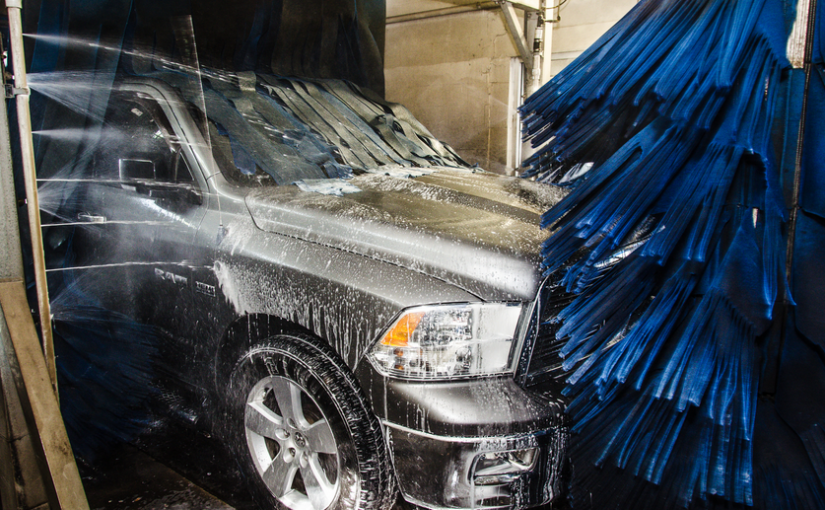 Ever since cars were invented, people found various ways to keep their vehicles clean. Some washed their own cars or paid others to get the job done for them. In 1914, one man in Detroit saw the opportunity to start a car wash business that he named “Automated Laundry.” Of course the car wash was not automated as it involved pushing the car manually through a tunnel-like area where three groups of attendants waited; those applying soap, those washing and those drying. A sole group pushed the car through the three stages. After a couple of trucks were clean, the workers would get quite tired and it was obvious this was not the best car wash in town. However, it would take another 26 years for any real form of automation to take place.

1940 + evolution
In 1940, the first semi-automatic car wash was designed by a man in Hollywood, California. His system mainly featured a conveyor with a hook attached to the car’s bumper pulling it through the three stages of soaping, washing and drying. By 1946, more automation was integrated into the system which now included overhead water sprinklers and a 50 HP air blower for drying. This semiautomatic car wash sparked ideas across the world and many small car wash businesses opened up in different places. More cars were being manufactured and sold in the US only causing demand for car wash outlets. Then in 1951, three men; Dean, Archie and Eldon Anderson made the first fully automated car wash system in Seattle. The recent advancements are largely credited to a man called Dan Hanna who created the Rub-a-dub car wash in Oregon. He also started a car wash empire that spearheaded innovation in the car wash industry and production of washing equipment. Nonetheless, most of his designs (produced after 1955) simulate ideas from the Seattle guys’ model of 1951. The car wash featured the following parts;

This was a fully hands-free operation and hands-free mechanisms became the delight of America’s car wash industry. Different models were being installed in different states all over the country.

Growth and tech advancements
Dan Hanna created a large enterprise that had some 31 outlets by 1955. The company focused on innovations and resulted in some of the greatest advancements in the car wash industry seen today. These included the wrap-around brush, soft-cloth friction washing, on demand roller conveyor belts, various tire washing methods and the recirculating water system. The enterprise was since established as the frontier car wash equipment manufacturer and dominated provision of parts and systems in the country. The 1970 gasoline and oil price hike may have significantly daunted the car wash industry but it quickly picked up surviving the torrid period. In the 80s, automatic wheel cleaners and the polish-and-waxing took hold adding to the innovations of Hanna. The company expanded exports to Japan, Korea and the UK recording over $30 million in annual sales. It became the top franchise in manufacturing and also led the conveyor manufacture lists within this period.

The modern scene
When you look at current trends, it is no doubt we have the best car wash in every single town considering how far we have come. Most people would not know that the industry started out with little (basically none) automation at all. The modern scene has cleaning machines which are fully automated tunnels requiring no manual labor. In addition to cleaning all the five sides of your car, they scrub the tires and clean undercarriage. In fact, most are self-service outlets although you will still find many with attendants especially if you want the interior space vacuumed and your seats cleaned. Modern car washes are more eco-friendly featuring low water and electric requirements, milder soaps and faster systems that clean cars faster resulting in efficiency and happy customers.

The car wash industry has evolved a lot since its inception in 1914. While it began with heavy manual labor, small innovations helped to ease the work until technology took over and the advantages of full automation were realized. If you do not have modern tech-advanced systems, then you cannot claim to be the best car wash in town.

Don’t forget to check out Magic Suds Car wash for all your car wash needs!